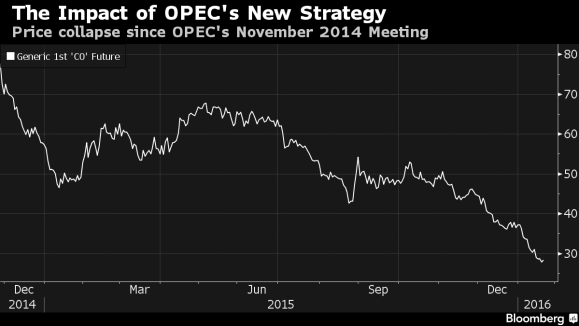 The impact of the continued slide in the price of crude is well known to everyone who has been tracking Nigeria’s economic situation particularly the exchange rate. One thing that has however not been fully acknowledged is the role OPEC (an organisation that Nigeria belongs to) played in all of this. From all accounts, the drop in the price of crude oil is essentially a kamikaze strategy used by OPEC to kill off the competition from shale producers in the US. As the chart above depicts, every time OPEC meets (months of July and November) the price of crude plunges.

OPEC believes that Americans and their shale technology are an existential threat to their very own survival and will rather sustain a price war that will engulf than allow them become the sole victim. At least in a war, either side has a chance of winning or settling for a mutually beneficial arrangement. At each OPEC meeting they meet and decide to continue waging this war with their only weapon being a refusal to cut oil prices. Oil supplies about 40% of the world’s crude oil market and owns over 80% of the worlds proven reserves. As such if OPEC decides to cut production, oil prices will rise.

Wars like this have collateral damage and the first victims are typically those with fewer buffers. Victims also end up being the first to cry which is why countries like Venezuela, Angola and even Nigeria are clamouring for a change in strategy. For example, Nigeria want an emergency OPEC meeting and Saudi Arabia is saying it is not necessary. Saudi believes the common enemy here are the Shale gas producers and rather than back down, they will prefer to be resolute and get other independent producing countries to increase supply or cut back.

For the ordinary Nigerian on the street, this indeed is a battle you have no say about. Your government is equally powerless despite being currently occupying the presidency of OPEC. The continued effect of the war is more job losses, further depreciation of the naira and cuts in budgets from your government, in your offices and your homes. Nigeria can’t increase oil production without sticking to its OPEC quota or decide how much oil prices should be. The consequences are dire and it’s glaring for all to see already. Beyond the CBN, the past government, the present government and other managers of the economy OPEC is the most to blame. The best the current government can do is to erect buffers that can provide help curtail the shocks we are likely to continue to experience for the next few months of not years.

The post above and its ensuing comments, if any, is purely the opinion of the writer(s). It therefore should never be considered as an investment advise of any sort. If required, readers should please consult a competent professional financial adviser for any investment decision.